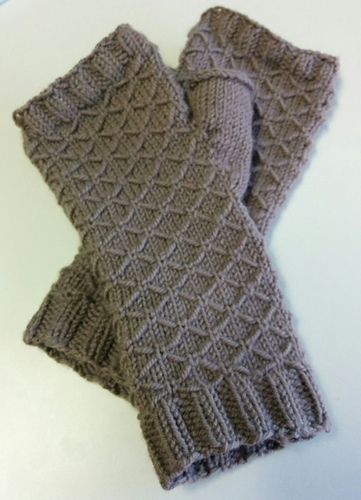 Overall: it’s a really fast pattern because it’s almost all stockinette & slipped stitches. It took me a bit to get the hang of how to do the pattern exactly, but once I got it…

Having now worn them once, I think they’d be more comfortable on my hands if I’d done 1/2 a pattern less; they feel a little long. Also, the pattern has a sort of smocking effect, which makes it a little shorter on the outside than on the inside. I don’t know if this could have been mitigated by draping longer lengths for the passed over yarn. It’s also possible that this effect will be reduced over time by wear.

Cast on at knitting group on Saturday and got several pattern repeats in, but decided on 1/11 that I needed to start the patterning over again. Ripped back to end of ribbing.

Finished the right hand (except thumb) at D&D on Saturday, then cast on left hand. This morning got to gusset of left hand. (Already!)

Finished the left hand on the bus, about to start on thumbs.