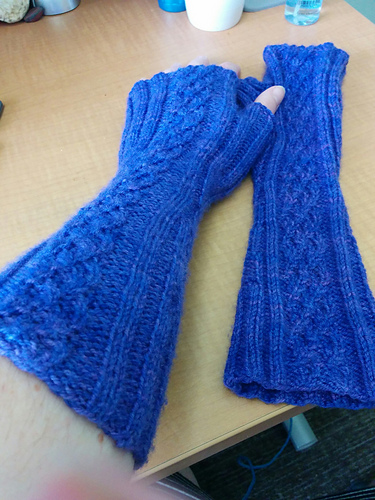 I just realized that this yarn goes really well well with this line, which I listened to again yesterday: “So you’re laying on your back and you’re looking up at the sky, and the sky is this… unnatural light purple color.” So that’s a thing.

(Altho in retrospect, I think my most recent Honey Cowl is a better color that way.)

JFC, yesterday I realized that I should’ve been decreasing for the last three repeats, so I pulled back and got reset at the end of the 2nd repeat. Aaaaaaand then I realized that the decreasing starts at the end of the 3rd. Ugh. Plus I’m going to have to do some rearranging of the stitches to get the decreases in the right places? This is not an especially well-written pattern, alas.

Either my row gauge is hilariously wrong, or this is made for someone with MUCH shorter arms than mine. (Did an extra pattern repeat at the narrowest point.)

Ugh this pattern is just not well written. I got all the way thru the gusset increases then looked at the picture in the pattern: yup, I was supposed to have been doing those added stitches in k2p2 ribbing. Welp, I’m not pulling back again unless I frog the whole damn thing, so I’ve just started ribbing from where I’m at.

Naw, but seriously this pattern. I totally missed the bit about casting on 2 new stitches when moving thumb stitches to scrap yarn. Although at least I caught it right away so I only had to pick back one round.

Did one repeat plus 6 rows after the thumb instead of three, because I don’t want them that long. (Oh, and didn’t do the 4 end rows, which I almost missed, because I don’t need the decrease.) I probably could’ve ended 2 rows sooner for the way I like them to hit on my hands.

Did the full 10 rows of thumb ribbing.

I am extremely ambivalent about these mitts now that they’re done. The cabling is off-center, and the forearm decreases and thumb gusset increases look sort of odd. But they’re comfy, and I hate frogging.

Next time I get a big thing of DK yarn, I might actually try rewriting, because I like the concept a lot.