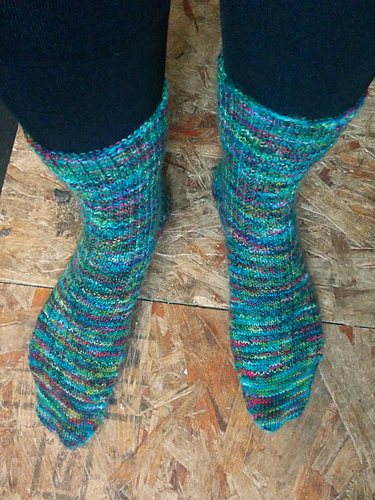 Started heel flaps! Did 14 repeats of the patterns, looked to be about the length I like on my socks, a little nervous about running low on yarn.

(For the first inch or two of the pattern, I was having some thoughts that maybe the patterning was getting lost in the variegation. But now I think it’ll have a nice subtle effect.)

Finished gussets (tbqh, the hiya-hiyas I bought at Madrone are almost too short for doing gussets 2-at-a-time)

Had to put the socks on hold for a bit because I lost my tapestry needles and some of stitches were on the wrong needle for the toe decreases.

Today I finally got this taken care of and got into the toe decreases!

Ended up decreasing down to 20 stitches instead of 28 to get the correct length.