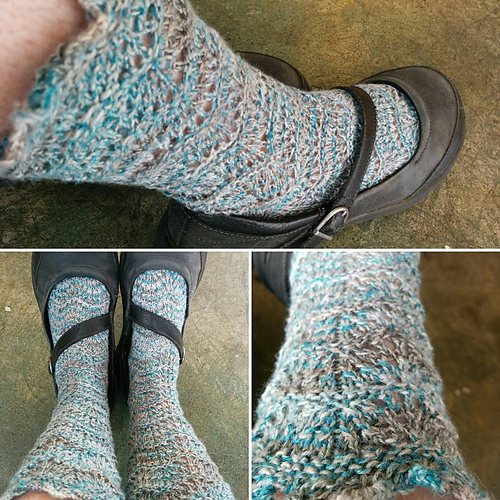 This is significantly too big for me with the pattern as written; I ended up making serious revisions which I’ll probably publish as its own pattern.

Had set these aside after getting confused about why I had too many stitches on the 2nd repeat of the lace row…realized I’d read it wrong. 🙁

So I tinked back 3.5 rows and kinda started over.

I love this pattern. I’m almost certain it’s too big for my ankles, and I don’t know what to do about it. :\

Calculated decreases (see photo of notes) and went down to 56 stitches, which seems about right.

Started heel flap on slightly rearranged stitches to get the full 1/2-width. Will need to reset after the turn to get the pattern right again.

Starting toe decreases after a row 6 of the pattern.

Tore out first cast-on, because it was awful. 2nd cast on going much better. Note: knitted cast-on, per http://www.knitty.com/ISSUEsummer05/FEATsum05TT.html

Into the gusset. Have been documenting the alterations; some minor differences between the two socks, but I think maybe they can be reconciled for a final version?