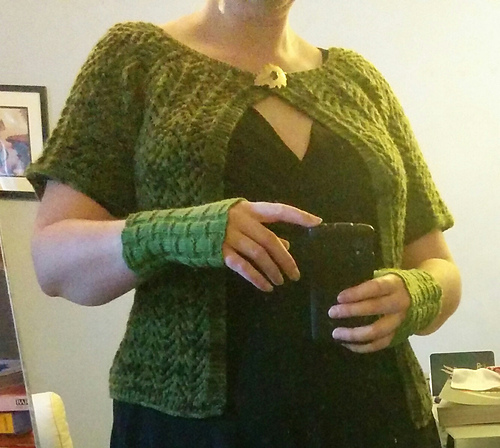 ZOMG these increases are hard to follow. I mean, I’m getting what it’s supposed to do, but my brain hurts.

I may have done some cock-eyed increases in the shoulders over the last few days, especially since I did a bunch of knitting at an all-day mandatory training. Might keep going anyway.

I agonized for days (while sick no less) whether to go with the increases as written, try for another set, or even rip back and reknit with my “old style” (ie, 4.25mm) #6 needles. The pattern says it’s approximately a “L or European 42”, which research says _might_ be too small?

But during a bout of insomnia on Monday morning, and after looking at it again, measuring everything again, etc, I decided to just go with pattern as written.

Yesterday cast off the body, today started on a sleeve.

Overall, I’m pleasantly surprised at how fast this was to make. I finished off the sleeves with garter instead of ribbing, because I wanted them to bell instead of contracting. Wondering if I ought to have done with the same with the bottom? Had just enough yarn for this pattern; either the sleeves or the body could’ve been just a smidge longer but I like leaving myself extra if I can. Really looking forward to wearing this once it’s finished drying!

Update after a few months of wearing off and on: I like the shape a lot, but the wool is a little heavy and the underarms have felted a bit.