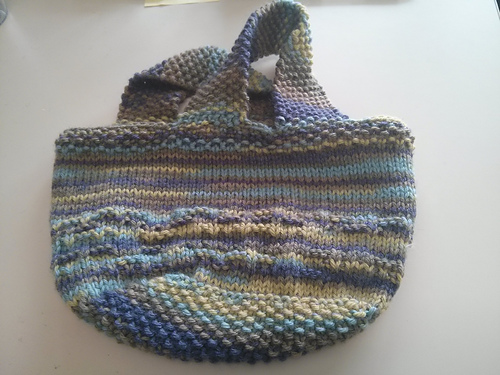 This is a nice fast little project, and I’m mostly pleased with how it turned out. Grafting seed stitch is a PITA, though.

I also incorporated some code knitting — originally I was going to use the system from http://www.ravelry.com/patterns/library/sydney-carton-cowl but I did not care for the way the worked in this project. It’s a bit of a bear to wrangle, and it makes it more open than you’d want for a bag.

Instead, I did Morse code as per the incorporated pattern, using an online translator and graph paper. Because I was working bottom up, I basically had to do it upside down and backwards, which was less crazy than it sounds. After all, writing it out forwards gave me a chart that’s in the same style as regular charting! (I’m not sure if I’m explaining that at all well.) I tried creating a Morse knitting code JavaScript application, but didn’t finish before finishing this project.

Got in my first name plus two quotes, which makes a nice little pattern in the bottom third of the sides:

Why code? Why Tale of Two Cities? Someone at work made a joke about Madame Defarge in relation to my meeting-knitting, and so it’s been in my head for a while. 🙂 Plus for this project specifically, I thought it would liven up the stockinette sides.