I was in 11th grade when the first Iraq war happened. There was a protest at my high school. And I didn’t protest. I don’t remember exactly why; what I remember is standing next to my crabby af American history teacher. He had protested a bunch back in the 60s, dealt with addiction and alcoholism, and gotten clean & sober. And he had the most skeptical view of…well…everything. So what I remember is him saying that protesting didn’t really make a difference, that it was basically pointless. Nothing changes.

It’s a very white middle class “go along to get along” viewpoint and I think on some level it meshed with other messages I was getting at home, in the culture, what I felt from my own introversion/social anxiety.

So I’ve really only protested publicly twice. When I was in college, I was involved in queer and women’s groups, which were working with other groups on campus to improve diversity and equity. I wasn’t as vocal as some, but I was involved in a sit-in outside the Dean of Students’ office circa 1995.

In 2006, my neighborhood grocery store publicly said they weren’t going to stock Plan B in their pharmacy, and that felt like a very specific local thing to get vocal about. It took almost a decade for anything to actually happen, because courts move slowly, although in any case it was frustrating to shout and shout and having nothing happen. (The Supreme Court told them to get bent last summer.)

On Saturday I’m going to the Women’s March in Olympia, though. I don’t think my walking around with a sign is going to change anything. (And wow there’s a ton of Issues with the organizers. Leaving Hillary off the list of honorees? Maybe accidentally including an anti-abortion group? A mish-mash of statements around sex worker rights? Heavy sigh.)

But I kinda don’t care. It feels important to simply say where I stand and what I believe. I’m pretty sure that my sign is going to say I JUST CAN’T EVEN because, I mean, really. But if not that, quite likely it’ll say I believe in the common good.

Which having to say out loud something so basic and in my mind so unremarkable reminds me of a sign from those Plan B protests of 2006: 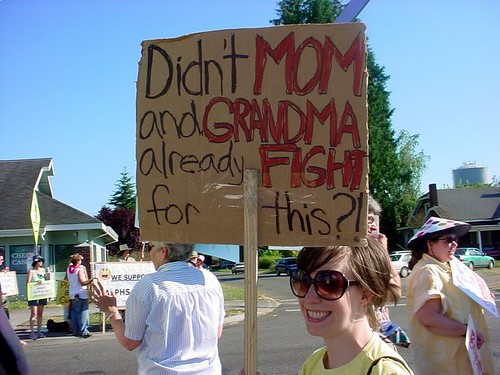 And boy howdy is it disheartening!

On the other hand, I’m seeing my people, I’m seeing how many feel the same way. Not just my “pocket friends” from the internet, but the people all around me. Mentioning that I’m going and being asked for more information, hearing that so-and-so will be there, etc., etc. I feel less frightened because I feel less alone. And because I’m less frightened, I have the emotional strength to do the other things. I’ve been calling legislators! Which given my level of phone anxiety, is nothing short of a miracle.

* Unrelated: within a few months he would be dead from pancreatic cancer. We spent the rest of the school year with a rotating cast of subs, watching a lot of movies. I sort of wish he’d been with us to talk about 20th C. American history.